Sara Louise von Rothschild, daughter of Anselm and Charlotte, was born in Vienna on 8 December 1834, and was known to her family as Louise. She married Raimondo Franchetti on 17 November 1858. Louise de Rothschild Franchetti, as she styled herself, shared characteristics of industriousness and strength of personality with her husband. These traits may have made them appear remote to their three children, including Alberto, later a composer.

Having spent a few years in Turin, the couple moved to the Franchetti palazzo on the Grand Canal in Venice, staying often at Viu and at their Palladian villa San Trovaso. In the 1870s, Louise began to buy large tracts of land in Italy, supplementing the already significant Franchetti estates. At her death in 1924, she left one of the largest fortunes in Italy. 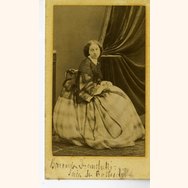