Nathaniel Mayer von Rothschild was born in Vienna on 26 October 1836, the son of Anselm and Charlotte.

Nathaniel, and to a greater extent his brother Salomon Albert, ran the Viennese bank after the death of their father. His interests were much wider than banking. His botanical gardens, the Hohe Warte, were available for enjoyment by the public, and he also built for his own use a town house on the Theresianumgasse in Vienna.

He kept his own stud and bred numerous fine horses including three Derby winners. In common with other members of his family, Nathaniel was a generous benefactor of many institutions; he founded a general hospital, institutes for the blind and deaf, an orphanage and a neurological clinic.

Photography was one of his hobbies and he published illustrated accounts of his travels in Europe besides endowing the Viennese Camera Club. 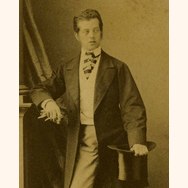