Ferdinand James Anselm de Rothschild, the son of Anselm and Charlotte, was born in Paris on 17 December 1839 and educated in Vienna. His memories of his mother (who died when he was 19) were warm; less so for his father whom he thought remote. England, his mother's home country became his adopted home, where he adopted the 'de' prefix rather than the von' of his native Austria. Arriving in England in 1860, Ferdinand lived near his English Rothschild relatives in London, mixing in the same social circles as his brother-in-law, Natty, Nathaniel, 1st Lord Rothschild (1840-1915), and counting the Prince of Wales among his friends.

Ferdinand married his cousin Evelina (Evy) (1839-1866), the daughter of his uncle, Baron Lionel de Rothschild (1808-1879) on 7 July 1865. After their marriage, Ferdinand purchased 143 Piccadilly, in London’s fashionable district of Mayfair, as a town home for himself and Evelina; his parents-in-law lived at 148, Piccadilly. However, the marriage was struck by great tragedy; Evelina died in childbirth; her infant child also perished.  Ferdinand’s sister, Alice von Rothschild (1847-1922) purchased 142, Piccadilly in 1866 after the death of her sister-in-law Evelina, so that she could be close to her widowed brother; a connecting door was made between the two properties. Ferdinand created a lasting memorial to his wife and child, establishing and supporting the Evelina Hospital for Sick Children in London, which continues today.

In 1874 Ferdinand bought “a lovely tract of land, [with] beautiful soil...and very pretty scenery” in the Vale of Aylesbury. Inspired by the châteaux of the Valois, Ferdinand employed Gabriel-Hippolyte Destailleur to build him his own French-style country house, with towers and external staircases such as he had seen while in Touraine. Destailleur submitted elaborate plans for a vast mansion, nearly twice the length of the house as built, with a ballroom and a winter garden. Ferdinand wanted the scale reduced and a new design was approved, although the architect warned him that ‘one always builds too small’ a mistake Ferdinand later rued. Waddesdon, perhaps the most well-known of all the great Rothschild houses in England, became the setting for Ferdinand's collection of art and objets d'art, and the scene of splendid entertainment. In a family of collectors of distinction, Ferdinand was pre-eminent, perhaps collecting to mask his sense of loss. The Waddesdon Bequest Room at the British Museum was established to accommodate the enormous collection he left the institution in his will.

In Rothschild fashion, Ferdinand settled into the community around his estate, representing Aylesbury as Liberal MP from 1885 and serving as JP and Deputy Lieutenant and Sheriff of Buckinghamshire. An active Freemason, he was a founder member and master of the Ferdinand de Rothschild Lodge in 1892. No less prominent in the Jewish community, Ferdinand served as Treasurer of the Board of Guardians from 1868-1875, was Warden of the Central Synagogue and founded the Ferdinand de Rothschild Technical Scholarship at Stepney Jewish Schools.

Ferdinand died at Waddesdon on his 59th birthday. 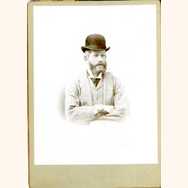