Salomon Albert Anselm (Albert or Salbert) von Rothschild (1844-1911) was born in Vienna on 29 October 1844. He was known as 'Albert' to his acquaintances and 'Salbert' to his family. He attended the Gymnasium in that city and the University of Brno. He married his cousin Bettina Caroline (née de Rothschild) (1858-1892) on 22 March 1876 and their main residence was on the Heugasse.

Albert served a Rothschild apprenticeship. His father, Anselm, wrote to Lionel in London, "I am glad to hear that you are satisfied with my son Albert who indeed is very steady and fond of business'" Under Albert, S M von Rothschild & Söhne became banker-in-chief to the Austrian government and the family's industrial holdings were increased through the investments of the Creditanstalt. In 1881 he converted the 6% Gold Loan to Hungary.

Banking did not interfere with his wide range of enthusiasms. His was the first automobile seen in Vienna. He was an early conservationist, (at his vast wooded estates at Langau in Lower Austria), built an observatory, collected works of art. Together with his brother Nathaniel, photography was one of Albert's many interests and he was a leading member of the Viennese Camera Club.  The Internationale Ausstellung Künstlerischer Photographien in Wien 1891 (International Exhibition of Art Photographers) was organized by the Club der Amateur Photographen in Vienna in 1891. Over 4000 photographs were entered from around the world for possible exhibit; Albert had two images of 'Waidhoffener Ninetta' in the exhibition; his brother Nathaniel (1836-1905) also had two images. 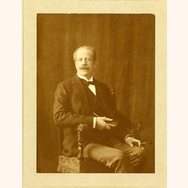