Alice Charlotte von Rothschild was born in Frankfurt on 17 February 1847. She spent her early years in Vienna, and had a rather lonely childhood after the death of her mother Charlotte, Baroness Anselm Salomon von Rothschild (1807-1859). From 1860, Alice spent increasingly long periods of time in England; in London, she occupied 142, Piccadilly, next door to her brother Ferdinand (1839-1898) and in the country, she spent time at Aston Clinton in the company of her cousins, Constance (1843-1931) and Annie (1844-1926) daughters of Sir Anthony (1810-1876) and Lady Louise de Rothschild (née Montefiore) (1821-1910). She was also a regular visitor to Mentmore, spending time with her cousin Hannah (1851-1890), daughter of Mayer Amschel (1818-1874) and Juliana de Rothschild (née Cohen) (1831-1877), to whom she was especially close. Her cousins remarked on her plainness, but found her graceful and attractive. She was at home in the English countryside, a fearless horsewoman usually surrounded by some of her many canine companions.

In 1898, Alice inherited Waddesdon Manor, the grand French style country house built in Buckinghamshire built by her widowed brother Ferdinand whose constant companion she became after the tragic death in childbirth of his wife Evelina (née de Rothschild) (1839-1866). She also had her own adjoining estate at Eythrope. She further added to Ferdinand's impressive collections, contributing her own collection of arms and armour. That the collections and the house remained in such good order was largely due to her rigorous application of house rules. On the estate she was remembered for her concern for her employees and tenants, all of whom enjoyed the best conditions and care. Alice was precise, punctual and memorably, the 'all-powerful', a name she earned after ordering one visitor to Grasse, Queen Victoria, off her flower beds.

Alice had suffered from rheumatic fever, which encouraged her to spend the winter months on the French Riviera from 1887.  Finding the coast vulgar, in 1888 she became the owner of 135 hectares of land among the perfume fields of Grasse near Cannes in the Alpes-Maritimes, and began to build a house and possibly one of the most ostentatious and extravagant gardens ever seen.

In November of that year work commenced on the construction of a large house. The villa became most famous for its garden, however, which Alice laid out entirely unaided by landscape architects. The terraced hillside was landscaped into rolling parkland, where Alice planted citrus trees by the hundred, arranged in groups to make them appear more natural and integrate with the existing landscape.  Here she planted citrus trees in vast numbers, and exotic plants such as palm trees, yuccas, aloes and bamboo. There was a rock garden, a winter-flowering grotto and a spectacular three kilometre drive designed with hairpin bends; around every corner lay a surprise for the visitor as the planting became progressively wilder and the panorama extended itself further the higher one climbed. Following the path upwards, the visitor encountered palms and aloes, a retaining rookery wall of 30m which was planted with perennials, then woods under-planted with lavender, rosemary and citronella, higher still, a cascade and miniature lake, then finally at the very top, a Tea Pavilion.

A visitor to Alice von Rothschild’s garden once quipped that every twenty metres a gardener stood waiting for a leaf to fall so that he might pick it up – this might not be so far from the truth as Alice employed over 100 gardeners, dressed in the Rothschild colours of blue and yellow, to maintain her garden.  Each year they planted 55,000 daisies, 25,000 pansies, 10,000 wallflowers, 5,000 forget-me-nots and 23,000 bulbs of tulips and narcissi. The lawns of the villa Victoria, named in honour of the British Queen, were planted with thousands of violets.  A variety of single violet was named after Alice de Rothschild by one of her gardeners.

Alice never married and died childless in Paris in 1922. Waddesdon Manor passed to her nephew, James Armand de Rothschild (1878-1957). The Villa Victoria passed to her French cousin Edmond de Rothschild (1845-1934), who sold it to the town.  It then became a hotel, 'The Parc Palace Hotel', but all that now remains is the tea house ('Pavillon de Thé'). 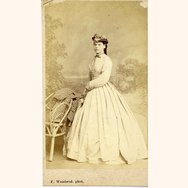