Leopold de Rothschild, born 22 November 1845, was the youngest of the five children of Lionel and Charlotte. He married the beautiful Marie Perugia (1862-1937) at Gunnersbury on 19 January 1881, a marriage attended by the Prince of Wales.

Leo was encouraged by his mother to persevere with his Cambridge studies, so that he could take his place at New Court alongside his two brothers. As a partner in the firm, he was as popular with the staff as he was with his acquaintances in the sporting arena, his more favoured environment. Leo's Southcourt Stud produced a number of winning race horses, making him extremely popular with the public too.

Leo and Marie developed the gardens at Gunnersbury, and extended their property at Ascott. Here and in Hamilton Place, London, they were gracious and generous hosts.

Leo became President of the United Synagogue and of the Jews' Free School. He was a treasurer of the Jewish Board of Guardians, and involved with the Evelina Hospital, established in memory of his sister by her husband, Ferdinand. 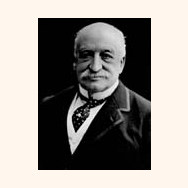