Constance ('Connie') de Rothschild, (Lady Battersea from 1892) was born at 107, Piccadilly on 29 April 1843, the daughter of Sir Anthony and Lady Louise de Rothschild. She spent her earliest years in Paris with her family, moving back to London in 1847. She enjoyed a thorough education, including drawing lessons, which was enlivened by sessions of whist with her father.

Anthony acquired the country estate at Aston Clinton in 1851. As a girl, Connie became involved with educational issues at the Jews' Free School and around the family estate of Aston Clinton. The infant school in the village was a gift to her on her 16th birthday - at her request. Some of her lessons were published as well as her Reminiscences, some verses and a story set around Aston Clinton.

In 1877, Constance married Cyril Flower, (who was created Lord Battersea in 1892). The couple had met through his friendship with her cousin, Leopold de Rothschild. In 1888 Flower and his wife acquired two cottages at Overstrand for the purposes of creating a holiday home. In 1897 their architect, Edwin Lutyens, rebuilt and joined them to form a large mansion in extensive gardens, The Pleasaunce.

After her marriage to Cyril Flower, Constance combined a lavish social life with charitable activities. Profoundly committed to the social concern instilled in her by her mother, Constance became active in English philanthropy, and became engaged in the temperance movement, taking the Pledge in 1884), and joining the British Women’s Temperance Association in the 1890s and eventually became a leader of temperance campaigns in London and the provinces. Constance was introduced to the women’s movement in 1881 by suffragist and temperance worker Fanny Morgan, whom Battersea helped to undertake a political career that resulted in her election as mayor of Brecon. Lord and Lady Batterea were noted for their philanthropy towards the working class, and following her husband's enforced retirement, Lady Battersea devoted most of her time and vast wealth to improving the living conditions of female prisoners; in the mid 1890s, her reputation for social activism led her to become active in the movement for reforms of English women’s prisons, and she was actively involved with the prison visitors of Aylesbury Women's Prison, andher work was recognised by her appointment by the Government to a prison board.

In 1885 Lady Battersea was jolted into struggling with the sensitive issue of white slavery by a national scandal and journalistic exposés of child prostitution and white slavery. Constance first learned about the desperate plight of London’s Jewish prostitutes from an English missionary in 1885. Horrified, she engaged many among the liberal leadership of Anglo-Jewry in the fight to rescue Jewish prostitutes by founding the Jewish Association for the Protection of Girls and Women (JAPGW). The mixture of Jewish traffickers and Jewish victims, she believed, demanded the creation of a distinctively Jewish organization. The JAPGW was composed of an interlocking network of nationally prominent middle and upper class Anglo-Jewish women closely connected to women’s temperance, suffrage and educational campaigns. As a result, they had entrée to and worked closely with feminist and inter-denominational anti-white slavery organizations. Founding the JAPGW launched these Anglo-Jewish women into organized English feminism and established the roots of an Anglo-Jewish woman’s movement seventeen years before the founding of the Union of Jewish Women.

Her husband's political career took her to Wales for a period, but in London she had a residence at Surrey House and then Connaught Place. In 1888 the couple bought land at Overstrand, Cromer, where Lutyens built for them The Pleasaunce. Connie died there on 22 November 1931, the anniversary of her marriage.

Constance, Lady Battersea has a detailed entry in the Encyclopedia of Jewish Women here »

Cyril Flower, 1st Lord Battersea (1843-1907) was a British Liberal politician and patron of art. He was the third of 18 children (the second of 12 sons) of Philip William Flower, of Furze Down, Streatham, Surrey. Cyril was born in 1843 at Tooting, and later lived in Streatham, both of which were rural environs at the time. He was educated at Harrow and Trinity College, Cambridge, and was called to the Bar, Inner Temple, in 1870. As well as exceptional good looks, it was said he possessed a genius for friendship, and an 'irresistible charm' that made everyone 'want to pet him'.

His father had established a successful merchant house in Sydney, Australia; in 1838, Philip William Flower, and his brother sailed to Australia in order to establish themselves as merchants in Sydney. In 1842 the partnership of Flower, Salting & Co was formed, shipping wool, tallow and gold to London. Towards the end of 1842, Philip returned to London, the other end of the firm's shipping routes, leaving his brother to oversee operations in Sydney. Upon his return to London, Philip, formed the firm of P.W. Flower and Co., and his property included Collier's Quay and other London wharves. From 1867, and with other partners, Philip began developing part of the newly laid out Victoria Street in Westminster, St Philips Square was named by Philip Flower as was St Philip's Church in its centre, which was consecrated in July 1870.

Like his father, Cyril Flower also became involved in property development, and he assisted his brother Arthur Flower with the development of Battersea's Park Town after the death of his father in 1872. Park Town was the lozenge-shaped estate running either side of Queens Road (now Queenstown Road), which extended from Battersea Park Road to Wandsworth Road. He also developed the mansion blocks lining the south side of Prince of Wales Drive.

Aided by his wife's fortune, in 1880 Flower entered Parliament for Brecon, a seat he held until 1885 when the constituency was abolished, and then represented Luton until 1892. He served briefly as a Junior Lord of the Treasury from February to July 1886 in the third Liberal administration of William Ewart Gladstone and also took a keen interest in mnatter relating to the improvemtn of education. He was a great favourite of Gladstone who, in 1892, raised him to the peerage as Baron Battersea of Battersea in the County of London and of Overstrand in the County of Norfolk. He took the motto "Flores curat Deus" (God cares for the flowers). In 1893 Battersea was offered the governorship of New South Wales. However he sacrificially turned it down due to the separation it would have imposed on Lady Battersea from her mother.

Patron of the arts

Apart from his property development and political career he was also a great collector and patron of art. He was a patron of James McNeill Whistler and was involved with the Pre-Raphaelite set. His bedroom in his London residence, Surrey House was one of the few interiors completed by Carlo Bugatti. One of the most famous works owned by Lord and Lady Battersea was The Golden Stairs by Burne-Jones, which Cyril, a patron and friend of Burne-Jones commissioned in 1880 for Surrey House. In his will of 1907, Lord Battersea bequeathed The Golden Stairs to the National Gallery with a life interest to Lady Battersea. She surrendered this interest in 1924 and presented the work to the nation through the National Art Collections Fund in order that it might be exhibited at the Tate Gallery. Lord Battersea maintained a broad range of other interests, as a sportsman, and photographer, and had a love for decoration and had a love for bright colour, both in his houses and on his person.

The Battersea's marriage was childless. Lord Battersea favoured the company of men, and he rumoured to have been involved in an 'indiscretion' in 1902. There are indications that Lady Battersea disapproved of some of his friends, and in her memoirs she cautiously comments that she had intuitively felt that "some of the very ardent and sudden likings he occasionally took to certain persons might lead to misplaced friendship". Lord Battersea died from pneumonia in November 1907, aged 64, when the barony became extinct. One obituarist was drawn to reflect: "Lord Battersea has for the last few years lived so entirely beyond the ken of society that the demise of this once so popular, handsome, and gifted man has attracted no attention, beyond a quiet expression that his death was a happy release for the kindly and philanthropic woman who had taken his name and given him her fortune." However, Lady Battersea's memoirs make plain her admiration for her husband, her enjoyment of his career, and their mutual interests. 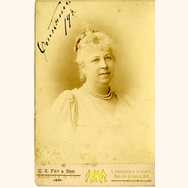