James Edouard de Rothschild, the elder son of Nathaniel and Charlotte, was born in Paris on 28 October 1844. He developed an early interest in books and manuscripts, many items in his collection coming from his father as a reward for diligence in school. He studied he Law, pleading his first case in 1866, and published a number of legal works, some in connection with the Legal Society of Medicine in France, which he had founded.

He entered the French House in 1870, becoming a director of the Nord and Est railway companies. His son judged him to be 'clear-sighted, methodical and discerning', qualities he no doubt applied to his business as well as the collecting of books. His particular love was French literature of the mediaeval age, and he worked on a project to publish unedited manuscripts from the Bibliotheque Nationale. James founded the Society of Ancient French Texts and the Society of Jewish Studies.

He lived in Paris on the avenue Friedland with his wife Laura Thérèse. After his death on 25 October 1881, three days before his 37th birthday, she took over the administration of the hospital he had founded at Berck-sur-Mer. 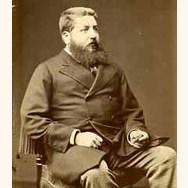