Arthur de Rothschild, the youngest son of Nat, was born in Paris on 28 March 1851 but was English by nationality. When the Franco-Prussian war broke out in 1870, he went with his elderly tutor to Brussels to continue his education, and on his return to Paris aged 21, he claimed French citizenship. For much of his life he lived with his mother on the second floor of 33, rue du Faubourg Saint Honoré.

Arthur passed an exam giving him the rank of a second lieutenant in the Reserve Artillery and eventually reached the rank of lieutenant in the territorial army. In 1871, he was awarded the Cross of a Knight of the Légion d'Honneur in recognition of his help to French prisoners interned in Belgium.

He did not play a significant role in the business of the Bank, simply standing in for the partners in the holiday period of July and August. In the following two months he participated in shooting parties at his mother's estate, the Abbaye des Vaux de Cernay.

Arthur was a keen yachtsman, and from 1895 took up motor-racing. He wrote a history of the postal system in France, had a 'mania' for stationery, and formed collections of ties, cigars and hair-ribbons. 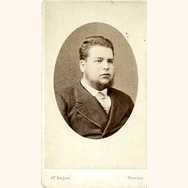