Hannah de Rothschild, Countess Rosebery from 1878, was born on 27 July 1851, the only child of Baron Mayer Amschel de Rothschild (1818-1874) and Juliana (neé Cohen) (1831-1877). Her good sense and presence of mind - she had often deputised for her mother on grand social occasions at Mentmore - was to make her an ideal political wife. An orphan at the time of her marriage, as the sole heiress of Mayer Amschel, Hannah had inherited the vast estate of Mentmore Towers in Buckinghamshire and 107, Piccadilly, and was said to be the wealthiest British heiress of her day. The collections at Mentmore were meticulously catalogued by her in memory of her father, to whom she had been devoted. Attentive and full of fun, Hannah had been his frequent companion at racing and yachting events. Hannah also had an interest in photography, and maintained a photographic studio at Mentmore.

The environs of the Mentmore estate were endowed with numerous bequests; schools, meeting rooms and houses bore her initials. In the Jewish community she was a generous, though often anonymous benefactor, but took a public interest in the school for the deaf and dumb founded by her mother. She was president for Scotland of the Queen Victoria Jubilee Institute for Nurses, taking a keen interest in general in the development of the nursing profession.

Marriage to Archibald Philip Primrose, the 5th Earl of Rosebery

It is said that Hannah was first introduced to her future husband, the 28-year-old 5th Earl of Rosebery, by Lady Beaconsfield, the wife of Benjamin Disraeli, at Newmarket Racecourse. The Disraelis were close friends and neighbours of the Rothschilds in Buckinghamshire.

Archibald Philip Primrose (1847-1929) had inherited his title from his grandfather in 1868, aged 21, together with an income of £30,000 a year. He owned 40,000 acres in Scotland, and land in Norfolk, Hertfordshire, and Kent. His father had died when he was eight and he had been brought up by his mother, who had subsequently married Harry Powlett, 4th Duke of Cleveland. Between the death of his father, in 1851, and the death of his grandfather, the 4th Earl, in 1868, he was known by the courtesy title of Lord Dalmeny. Rosebery was considered to be strikingly handsome and immensely cultivated. He was highly intelligent, and a brilliant future was forecast for him by his tutors at both Eton and Christ Church, Oxford. Rosebery’s declared ambitions were to marry an heiress, own a horse that won the Derby and be Prime Minister. He fulfilled all three. Primrose would later serve as Prime Minister of the United Kingdom from 5 March 1894 to 22 June 1895; he never sat in the House of Commons and, like others in that situation, found it difficult to lead a government from the Lords. Rosebery was a Liberal Imperialist who favoured strong national defence and imperialism abroad and social reform at home, while being solidly anti-socialist.

As early as 1876, there were rumours of an engagement. However, antisemitic feelings were prevalent in the upper echelons of society, particularly so among those closest to the Queen at court, where following the death of the Prince Consort in 1861 the Rothschilds became pointedly excluded. Rosebery's own mother was horrified at the thought of a Jewish woman, even a Rothschild, in the family. Rosebery too felt there was an impassable barrier of faith; at this time, it was inconceivable that any children could be raised as Jews. Hannah also faced obstacles from her own family, and the wider Jewish community, who were publicly against the union. The formal engagement of marriage was announced on 3 January 1878. Writing to a friend in January 1878, Rosebery described his wife as "very simple, very unspoilt, very clever, very warm-hearted and very shy ... I never knew such a beautiful character." The marriage was celebrated in London on 20 March 1878, a civil ceremony being performed at the register office in Mount Street, Grosvenor Square, and also in a Christian ceremony at Christ Church in Down Street, Piccadilly. To show disapproval, no male member of the Rothschild family attended the ceremonies; however, any shortcomings in the guest list were compensated for by the guest of honour - the Prince of Wales - and Disraeli, who gave the bride away.

For the first few years following their marriage, the Roseberys resided in London in the Piccadilly house Lady Rosebery had inherited. As the couple's social and political interests increased from 1882, they leased the larger Lansdowne House, well suited to be the home of the political salon which Hannah was to establish. Here political and social leaders of the day mixed with royalty, authors such as Henry James and Oscar Wilde, and other prominent social and intellectual figures of the time.

The Roseberys divided their year among their various homes: London for the social season and parliament, Mentmore at weekends to entertain both political and shooting house-parties. In August the household would move north to Dalmeny for the grouse shooting. In between, occasional days and the week-long Derby meeting would be spent at their home 'The Durdans' in Epsom; Rosebery's horses won the Derby in 1894, 1895 and 1905. Together the Earl and Countess of Rosebery added greatly to not only the Mentmore collection but also to that housed at Dalmeny House, Rosebery's Scottish seat, amassing a great library of rare and continental volumes and a collection of artefacts formerly belonging to the Emperor Napoleon I.

Published commentators on the Roseberys claim their marriage was happy, and there is no known evidence that Hannah was anything other than happy in her marriage. However, much evidence suggests that Rosebery, while professing to be happy, was at times irritated and bored by Hannah, who was always keen to accommodate his every whim. The relationship between the couple appears at times to have been almost that of a mother and child; however, Hannah's death on 19 November 1890 at Dalmeny, her husband's Scottish seat, of typhoid fever, compounded by Bright's disease, left him distraught. 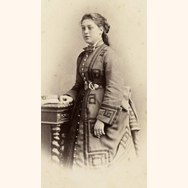