Adèle Hannah Charlotte von Rothschild was the eldest of seven daughters of Mayer Carl von Rothschild and was born in Frankfurt on 11 January 1843. By the age of 21, she had married her French cousin, Salomon James, settled in Paris, given birth to her only child, Hélène, and had been widowed. In France she was also known by the 'de Rothschild' surname.

Adèle largely withdrew from the world, cloistering herself and her daughter on the rue Berryer and confining her limited social contacts to her sisters Laura Thérèse de Rothschild, the Duchess of Gramont and the Princesse de Wagram.

Having expressed clear disapproval of the marriages of the two latter sisters outside the Jewish faith, Adèle was shattered to discover that her daughter had made the same choice. 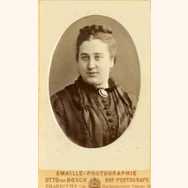