Clementine Henriette von Rothschild, who died on 18 October 1865 aged 20, was remembered as a 'saintly girl' deeply devoted to her faith. She was the daughter of Mayer Carl and Louise.

She wrote a small book, Letters to a Christian Friend on the Fundamental Truth of Judaism, which was published some years after her death. In her memory, her mother established a children's hospital in Frankfurt. 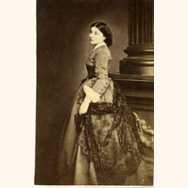