Laura-Thérèse von Rothschild was the fourth daughter of Mayer Carl and Louise of Frankfurt, in which city she was born on 18 July 1847. She married her French cousin James Edouard on 11 October 1871, becoming Baroness James Edouard de Rothschild. The couple were well-suited: there was nothing frivolous about him, and Thérèse was a pious, orthodox woman, who never became Parisian.

During the Franco-Prussian war she had cared for French wounded in the hospitals of Frankfurt. In the early years of their marriage, the couple became attracted to Berck-sur-Mer in the Pas-de Calais, and built the Chalet des Oyats near to the hospital they established. Henri, their son, felt that Thérèse showed more love and warmth to the patients of the hospital than to him and his sister. Thérèse inherited some of her father's magnificent collection of silver, which she housed in the avenue Friedland. After a long illness she died in Paris on 9 April 1931. 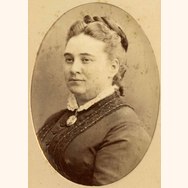