Hannah Louise von Rothschild was born in Frankfurt on 9 November 1850. She was the fifth of Mayer Carl and Louise's seven daughters.

Remembered in the community as a genuine benefactress of the poor, Hannah Louise devoted her whole life to charitable work in Frankfurt.

Outstanding amongst her works were the free public library and the Carolinum dental hospital, both established in the name and memory of her father. 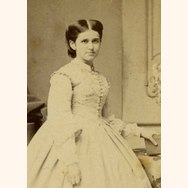