Margaretha Alexandrine von Rothschild was born in Frankfurt on 19 September 1855. After her marriage to the Duc de Gramont in Paris on 10 December 1878, she was more commonly known as Marguerite.

She had a fine artistic taste and yet retained a love of simplicity. Both qualities were reflected in her homes, the château de Mangé and a property in the Oise.

Marguerite was an intimate of Proust whom she introduced to the milieu of the Faubourg Saint Honoré. She appeared with her children and husband in a portrait he commissioned from de Laszlo. She died on 25 July 1905. 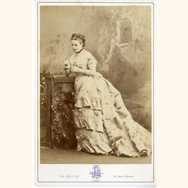