She married Alexandre Berthier, 3rd Prince de Wagram on 24 March 1882 in Paris. The couple had three children in four years. Her salons, which alternated between their properties on the avenue d'Alma and in the château de Grosbois, were enlivened by her charm and vivacity.Proust recalled her in A la recherche du temps perdu.

Berthe was an anglophile, and imbued her country parties at Grosbois with the spirit of England. She became involved with the history of the district and undertook an inventory of the library and archives of Grosbois, a testimony to her love of literature and her application to intellectual pursuits.

Berthe's only son, Alexandre, died in combat in May 1918 aged 35. In his short life he had assembled an exquisite collection of modern art, including dozens of works by Sisley, Pissaro, Degas and Monet. 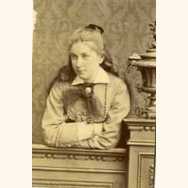