Adelheid von Rothschild was the daughter of the orthodox Wilhelm Carl and Mathilde von Rothschild of Frankfurt, where she was born on 19 August 1853. She married her cousin Edmond on 24 October 1877; the influence of each on the other was great.

After their marriage the couple shared rue Laffitte and the château at Boulogne-sur-Seine with Edmond's mother Betty. They also had property on the rue du Faubourg Saint-Honoré and at Armainvilliers. Adelheid was very musical and her artistic tastes were in the typically Rothschild direction of 18th-century paintings. She also formed a fine collection of lace.

From the 1880s, Adelheid became involved in her husband's life work in Palestine, where she accompanied him on five visits. Known as 'the woman who loves God', Adelheid was discrete and self-effacing in her private life. After the death of her father in 1901, she concerned herself especially with the furtherance of his charitable activities in Frankfurt, ensuring that the family's old home in the Judengasse became a permanent museum.

Adelheid died on 22 June 1935. In 1954, her remains were laid to rest alongside those of her husband at Ramat Hanadiv in Israel. 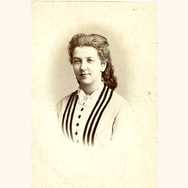