Minna Caroline von Rothschild - Minka - was born in Frankfurt on 18 November 1857, the daughter of Wilhelm Carl. On 27 February 1878 she married a member of another renowned family of the city, Maximilian Benedikt Heyum Goldschmidt and the couple raised their five children in Frankfurt.

Minka was joint executrix of her father's estate and together with her sister, Adelheid, made certain that his wishes regarding his foundations in Frankfurt were carried out. The charitable foundation which bore her name was established by her husband after her death, just two years after her father's, on 1 May 1903. Her son, Albert, married Miriam Alexandrine de Rothschild, the daughter of her sister Adelheid. 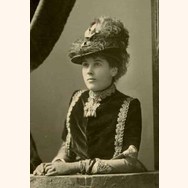