Zoë Lucie Betty de Rothschild, known as Lucie, was born in Paris on 25 February 1863. On 31 May 1882, aged 19, she married Léon Lambert (1851-1919), the representative of the Rothschild Houses in Brussels. The couple settled in Brussels on the avenue Marnix, but maintained a home in Paris. Lucie brought to Brussels the kind of salon she was familiar with from her childhood at avenue de Marigny.

She died on 15 August 1916 leaving her husband and four children, whose father wrote to them, 'Never forget that you are the children of a mother who personified all that is great, beautiful, noble and pure'. 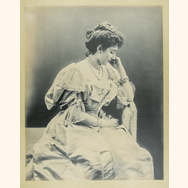