Aline Caroline de Rothschild was born in Paris at her parent's house on avenue Marigny on 21 October 1867. She married Edward Sassoon two days before her 20th birthday on 19 October 1887 in a ceremony in the synagogue at the rue de la Victoire, Paris.

The couple settled in London at 25, Kensington Gore, where Aline, a talented artist, set up her own studio. She was an accomplished horsewoman and skater, and shared her husband's interest in fishing. She was part of a coterie of 'personages distinguished for their breeding, beauty, delicacy and discrimination of mind' - 'The Souls' - which centred on members of the Tennant family.

In public life, Aline was a popular supporter of her husband in his political career. In her own right, she supported a number of girls' clubs in London's East End.

Aline died in Paris at her parent's home on 28 July 1909. Her son, Philip, became an MP, and her daughter Sybil married the Marquis of Cholmondeley. 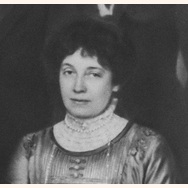