Berthe Juliette de Rothschild, known as Juliette, was born in Paris on 11 July 1870, the youngest daughter of Gustave and Cécile de Rothschild. She married the Baron Emmanuel David Berénd Leonino on 25 May 1892.

Juliette was much less well known in society than her two sisters. She died on 14 December 1896, aged only 26, after a fall from a horse. Her husband devoted himself to the education of his two daughters, Marguerite and Antoinette. 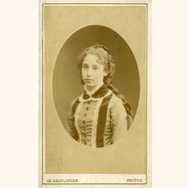