Hélène Betty Louise Caroline de Rothschild was born in Paris on 21 August 1863. Her father, Salomon, died suddenly in 1864, and her upbringing was in the sole hands of her mother, Adèle, who was inclined towards strictness. Nevertheless, Hélène was able to indulge a passion for horses.

Adèle had strongly disapproved of her sisters' marriages outside the Jewish faith, and when her daughter made the same choice, she cut her off completely. Hélène married Baron Etienne van Zuylen de Nyevelt on 16 August 1887. Together they began the reconstruction of the Kastel de Haar, near Utrecht, but gradually led separate lives. One of her sons was Egmont, the father of Marie-Hélène who married Guy de Rothschild.

Hélène was one of the first women to compete in an automobile race. Etienne was the president of the Automobile Club de France and served as a main organizer for the 1898 Paris-Amsterdam-Paris race, a 1431 km trail run on 7-13 July. It would have caused a scandal if a women openly competed, so Hélène  entered under a pseudonym; Hélène was known as ‘Snail’ during the race. She finished the race, but was not in the top 15. In 1901, Hélène entered the Paris-Berlin race but didn’t even start; she had suffered a technical failure. Hélène was one of a trio of pioneering French female motoring celebrities of the Belle Epoque, together with Anne de Rochechouart de Mortemart the (Duchess of Uzès) and Camille du Gast.

Hélène was perhaps too much like her mother for her marriage to Etienne to survive. Hélène met Renée Vivien in 1901, and the two women  became close friends. When Adèle died, Hélène was devastated and looked to literature for solace. She published around a dozen novels under the name Hélène de Zuylen. Having lived for many years in Portugal, she died in New York on 17 October 1947. 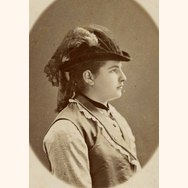