On 25 February 1913 he married Dorothy Pinto and the couple divided their time between a house in Park Street, London, and an apartment on the Champs Elysées in Paris.

After war service, during which time he visited Palestine and saw something of his father's achievements there, he applied for British citizenship. In 1922, Jimmy inherited Waddesdon Manor and Eythrope from his cousin Alice and he and Dollie settled into this new career, becoming involved with the political and social life of the area.

Jimmy sat in the House of Commons as Liberal MP for the Isle of Ely from 1929 to 1945, and was considered one of the wittiest members in the House. He was also Deputy Lieutenant for the City of London.

During the Second World War, when Jimmy was Joint Parliamentary Secretary for the Ministry of Supply, the Waddesdon estate became home to a group of Jewish refugees from Frankfurt. Jimmy became more involved with the new Jewish state, liquidating his father's PICA organisation and making available in his will the funds to establish Yad Hanadiv. 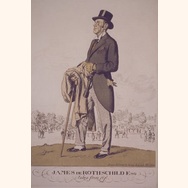