Miriam Caroline Alexandrine de Rothschild was born in Paris on 16 March 1884, the daughter of Edmond and Adelheid. Typically for a daughter of a Frankfurt Rothschild she received a rather strict upbringing, and was described by a cousin as having 'infinitely more brains and originality' than either of her brothers.

Alexandrine was similar to her cousin Alice: both were highly intelligent, authoritarian and inclined to appear plain.

She studied medicine, later specialising in dietetics. She married Albert Max Goldschmidt, a cousin, on 15 December 1910, but divorced him during World War One. After the divorce, Alexandrine was free to develop her passion for gardening at her château of Boulogne which she had inherited from her father.

Alexandrine was a judicious and respected collector of literary and musical manuscripts as well as first editions. In common with many other Rothschilds, she also had a taste for 18th-century art. After the war she spent increasingly long periods of time in Switzerland, and died on 15 March 1965. The Beni Israel Trust was her generous gift to Israel. 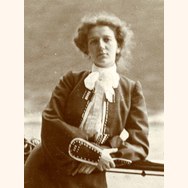