Alphonse Mayer von Rothschild (Buster) was the second son of Albert and Bettina and was born in Vienna on 15 February 1878.

Alphonse studied law, although he never practised, and was a lover of classical literature and philately. His stamp collection was one of the world's finest. Alphonse maintained some of the Rothschilds' most splendid residences, notably the Theresianumgasse in Vienna and the estates at Langau and Schillersdorf.

He married an Englishwoman, Clarice Sebag-Montefiore, on 20 November 1912 and went on to have three children. Only two years later, upon Austria-Hungary’s official declaration of war against Serbia on July 28, 1914, Alphonse and his younger brother Eugène (1884-1976) were called out of the reserves to serve with the Imperial and Royal 6th Dragoon regiment as first lieutenants on the eastern front against the Russians in Galicia. Alphonse served as an administrative officer (Ordonnanzoffizier). At the start of the war in 1914, he served under the first army and was then transferred to the seventh cavalry division for a few weeks in October 1914. In March 1915 he was promoted to the rank of cavalry captain in the reserves (Rittmeister der Reserve). In June of that year, he was recognized for his outstanding performance under the second army for his work as a legal advisor and communications officer. At the end of November 1917, he was posted to the Italian front near Asiago with the eighteenth infantry division. Shortly afterwards he was called back to the second army on the eastern front until the conclusion of the war. In September 1918 he was officially discharged from military service and was awarded the kaiserlich-ottomanische Kriegsmedaille.

From 1911 to 1938 he was President and Chairman of the Nathaniel Freiherr von Rothschild Foundation for Mental Illness in Vienna.

At the time of the Anschluss, the Nazi annexation of Austria in March 1938, Alphonse and Clarice were in London. They managed to meet their daughters in Switzerland. The family travelled together to England, and then to America, where Alphonse died on 1 September 1942. 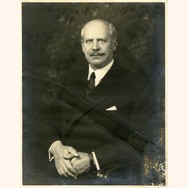