Louis Nathaniel von Rothschild was born in Vienna on 5 March 1882, the third son of (Salomon) Albert (1844-1911) and Bettina Caroline (1858-1892). He was educated at the Theresianum Academy, before embarking on a banking apprenticeship in Hamburg and New York. On his father's death in 1911, Louis found himself managing the family firm which continued to play an active role in the Witkowitz iron works and the Florisdorf Engineering works. He was also chairman of the Creditanstalt. Louis inherited the Palais Rothschild in Vienna, commissioned by his father Albert, one of five Palais Rothschild in the city owned by members of the Rothschild family. It was located at Heugasse 26 (today Prinz-Eugen-Strasse 20-22), in the IVth (Wieden) district of Vienna, and housed an exquisite collection of art and antiques. His personal interests included polo and archaeology and he was a supporter of research projects in the physical sciences.

Service during the First World War

During the First World War, Louis provided his support for the Austro-Hungarian cause on the home front as the director of the Viennese Rothschild banking house. Although he was called into active service on 16 August 1915, he was stationed in Vienna to be part of the monarchy’s consortium of banks to focus on the empire’s finances and war bond campaigns.  Louis personally wrote an article in the Neue Freie Presse calling for the Austro-Hungarian public to purchase war bonds: “Just as the soldier in the trenches fulfils his duty to the fatherland, everyone should contribute within their means toward the fulfilment of the fatherland’s financial needs.”  While Louis’s words and actions exuded patriotism, the international character of his family stirred up feelings of suspicion in the press. The Armeeblatt in particular criticized Louis for his family connections in enemy lands and not having translated his 'French' name,  thus calling into question his allegiance. The honours Louis received for his financial contributions on the home front, however, speak greater volumes about his loyalty to his home country: he received the Komturkreuz des Franz-Joseph-Ordens mit dem Stern in 1915 and the Großkreuz des Franz-Joseph-Ordens in 1916. 1

Choosing to remain in Austria, Louis brazened out the machinations of the Nazis in continental Europe. After the Anschluß of Austria to Nazi Germany in March 1938, he was arrested at the airport at Aspern and held for ransom by the Nazis. Imprisoned until July 1938, his property and assets were placed under control of a German ‘commissioner’. While imprisoned he was visited by Heinrich Himmler; Louis apparently impressed the SS leader, who subsequently ordered that the Baron’s prison conditions be improved with better furniture and sanitation facilities. Despite appeals from the British Royal Family, Louis was later held under house arrest in Vienna's Hotel Metropole while the German government attempted to expropriate his business concerns and personal fortune. Louis was released only after lengthy negotiations between the family and the Nazis and upon payment of $21,000,000, believed to have been the largest bail bond in history for any individual. On his release in July 1939, Louis headed for the USA, where he eventually became an American citizen.

Life in the United States

On 14 August 1946, Louis married the Countess Hildegard Johanna Caroline Marie Auersperg (1895-1981), and the couple settled on a farm in East Barnard, Vermont. Although they never had children, he enjoyed the mountains, and was able to continue with his other hobbies, including botany, and golf, which replaced the polo of his early years. Louis never returned to live permanently in Vienna; visiting the city in 1947, Louis found the Palais Rothschild (which had been occupied by Adolf Eichmann, where he set up the infamous Central Agency for Jewish Emigration in Vienna, the purpose of which was to organise the ‘emigration’ of Jews from Austria) still standing, but in a state of total neglect, its interior largely plundered. In following years Louis, in face of stiff government opposition, tried to obtain compensation for his family's losses from the Austrian government, eventually only receiving a small payment. He gave the Palais Rothschild and its gardens to the Austrian Government, on condition that a pension fund for former Rothschild employees be created with the proceeds, and in 1954, the Palais was torn down. It was not until 1998 that thanks to the efforts of Louis’ niece Mrs Bettina Looram (née von Rothschild) (1927-2012) over 200 art works were returned to the Rothschild heirs by the Austrian Government, and were placed at Christie's in London for auction in 1999. 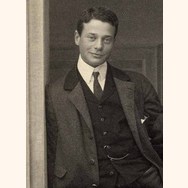