Eugène von Rothschild, the fourth son of Albert and Bettina, was born on 6 March 1884. Eugène showed very little inclination to enter the banking world, and instead became a soldier.

Eugène served in the First World War, primarily on the eastern front in Galicia and Romania. When Austria-Hungary mobilized for war, he was transferred to the first squadron of the 6th Dragoon regiment.  Like his brother Alphonse, Eugène served initially in the role of administrative officer (Ordonnanzoffizier).  On December 6, 1914 during combat in Iwkowa, Galicia, he and his horse fell, resulting in a broken leg.  Roughly two months later, he was back on the front again. During a defense maneuver against the Russians on December 27, 1915, he stepped in as a commanding officer of a platoon (Zugskommandant) and was awarded the Silberne Militärverdienstmedaille am Bande des Militärverdienstkreuzes mit Schwertern in recognition for his service in battle.  On May 9, 1915, Eugène was promoted to the rank of cavalry captain in the reserves (Rittmeister der Reserve).  When Romania declared war against the Central Powers in 1916, Eugène’s regiment moved to the front lines, where he took on the position of chemical warfare officer (Gasschutzoffizier)  and was given command of his own reserve squadron.  Eugène was stationed on the Romanian front until the beginning of 1918, when Russia – now under Bolshevik leadership – declared a ceasefire.  Shortly afterwards on February 3, 1918, Eugène was discharged from military service,  leaving a highly decorated military career as the army was much reduced. The highest honor he received was the Militärverdienstkreuz 3. Klasse.

In 1911, Eugène inherited the grand country estate of Enzesfeldt, about 25 miles from Vienna from his father Salomon Albert Anselm von Rothschild (1844-1911), who had purchased the estate in 1880. On 28 April 1925 he married the twice-married Cathleen 'Kitty' Wolff, a doyen of American high society; she was the ex-wife of Dandridge Spotswood and Graf Erwin Ferdinand Karl Rochus von Schönborn-Buchheim. Kitty had one son by her first husband. The marriage was happy, but childless. Between the wars the Viennese Rothschild family entertained on a grand scale at Enzesfeldt, although Eugène and Kitty spent most of their time in Paris.

During the Second World War, properties of the Viennese Rothschilds, including Enzesfeldt were confiscated by the Nazis. The Viennese business of the Rothschilds was seized, and Eugène and other members of the family had to pay a substantial ransom for the release of his brother Louis von Rothschild (1882-1955) from imprisonment by the Gestapo in Vienna. Eugène and Kitty sought refuge in the United States. Through Aristides de Sousa Mendes, the Portuguese consul-general in Bordeaux, they secured safe passage, Eugène arriving on the Yankee Clipper on 3 August 1940. Kitty followed him, arriving by the same method on 4 October 1940. Settling on Long Island, the couple took up a quiet residence at 'Still House' in Locust Valley, Nassau County, New York.

Kitty died in 1946; bereft, Eugène was said to visit her grave at the end of the garden daily. His housekeeper, Gerty, who kept a proprietary eye on him, noticed that the Czechoslovakian Countess Cecilia Sternberg, (later famed for her memoirs, The Journey), was beginning to take the Baron out of himself - to the point where he was enjoying life again. Sternberg related how Eugène first met the actress Jeanne Stuart. Gerty had met an English girl - "not quite a film star, a starlet let's say" - in a shop at Glen Cove and persuaded the Baron to invite her to lunch.

The couple were married in 1952. The marriage was a happy one; the couple visited London in Coronation year. Jeanne applied a sound business mind to her husband's finances, helped him to retrieve confiscated property, and invested soundly. They had property in Manhattan, as well as a house in England. Finally, in the late 1950s, they settled in Monte Carlo, becoming friends of Prince Rainier and Princess Grace. Eugène sold the Enzesfeldt estate in 1963. Eugène died in Monte Carlo in 1976, aged 92.

Cathleen 'Kitty', (first) Baroness Eugène von Rothschild was born in Philadelphia in 1885, the daughter of Dr. Lawrence Wolff and Mary Olivia Wolff. Eugène was Kitty's third husband; she was the ex-wife of Dandridge Spotswood and Graf Erwin Ferdinand Karl Rochus von Schönborn-Buchheim. Kitty had one son by her first husband.

Kitty was acquainted with Wallis Simpson and the American interior decorator Elsie de Wolfe (Lady Mendl), and it was on the latter's recommendation that Baron and Baroness von Rothschild had the ex-King, HRH the Duke of Windsor to stay at Schloss Enzesfeld when he left England, having signed the Instrument of Abdication on 10 December 1936. It was to prove a difficult three-month visit: the Duke was a demanding guest, and he had to remain apart from Wallis Simpson until there was no danger of compromising the granting of a decree absolute in her divorce proceedings. The Windsors were reunited at the Château de Candé, Monts, France, in May 1937, where they were married a month later.

Settling into their new home in the United States at the outbreak of the Second World War, Kitty chose 'Still House' in Locust Valley, Long Island which had been designed by Bradley Delehanty c.1928 for the prominent Manhattan lawyer Paul D Cravath. During the 1920s and 1930s, Long Island became the summertime playground of the rich, famous and politically powerful, During and after the War, the glamour of the area faded as it became difficult to staff the enormous mansions. However for the Austrian born Eugène it provided a safe refuge from the turmoil of war-torn Europe, and also provided a haven for Kitty’s guests, the Duke and Duchess of Windsor (the Duke had been coming to the North Shore area since the early 1920s for the polo matches).

Kitty created an elegant home in the Georgian Colonial style, which was described ‘Old World Charm Meets Modern Living’. The property originally occupied an estate of 37 acres, and the house was shaded by towering oaks, elms, beeches and pines, with lawns, fruit trees and rhododendrons. The house was elegantly proportioned with a whitewashed brick facade, with ivy and wisteria. Oriented around a large central hall with a graceful spiral stairway, there were six reception rooms on the first floor. Almost all opened to terraces, commanding delightful views. In the large living room, three immense Palladian windows overlooked a terrace and the distant countryside. A wrought-iron stairway led to a balcony in the huge, magnificently panelled double height library, with panelling rumoured to have been salvaged from the Cunard liner, the first Mauretania. On the second floor were five large bedrooms, and a ‘sun-deck’. The property included servants’ bedrooms, together with many outbuildings including a laundry and garages. Kitty died at 'Still house' from a cerebral haemorrhage in October 1946.

Jeanne, (second) Baroness Eugène von Rothschild was a stage and film actress, professionally known as Jeanne Stuart. She was born Ivy Sweet, in Hampstead, England in 1908, the youngest of three daughters of William James Sweet, a copper-beater, and his Welsh wife.

At a very early age Ivy became a dancer, left home and travelled the country in a troupe of girls. She was on stage by the age of 15, and enjoyed a career in the theatre, in which she took part in a number of the light drawing-room comedies and murder mysteries that were so popular on the London stage in the 1930s. She performed alongside Jack Hulbert, Cicely Courtneidge, Jack Buchanan and many others. She progressed to the New York stage in September 1930, returning to London in 1933. Jeanne made her motion picture debut in 1931 and went on to perform and star in more than twenty films.

She was married in April 1933 to businessman Bernard Docker at a register office ceremony in Prince's Row, attended by the Duke and Duchess of Atholl, and they honeymooned in South America. Jeanne was given the 860-ton yacht 'Shemara' as a wedding present. However, her marriage lasted only a few months. Docker's disapproving father had her followed by private detectives; on discovering her association with actor David Hutcheson, Docker divorced her. Although Bernard Docker claimed in the press that they never saw one another again, Jeanne's version was that they remained on the best of terms and that he later wished to re-marry her. Jeanne even called herself Lady Docker after 1939, when not using her professional name on stage. Jeanne returned to the stage, and for three years her name was linked with James Stewart. For a time during the war, she was also the girlfriend of the 6th Earl of Carnarvon.

Just after the Second World War she moved to the United States, taking up residence on Long Island, where she was first introduced to Eugène von Rothschild. They married in 1952, after which she gave up her acting career. For a time, she and her husband lived in New York City and Long Island but eventually made their permanent home in Monte Carlo, Monaco. After Eugène’s death, her days passed in serene widowhood, surrounded by her photographs and her many friends in her large apartment with a long garden, in the Boulevard des Moulins. Baroness Jeanne de Rothschild died in Monte Carlo in 2003 at the age of 94. 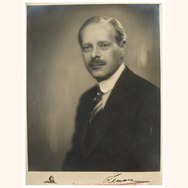