Lionel de Rothschild (1882-1942) bought the Exbury estate in 1919 with the proceeds from the sale of his uncle Alfred’s house at Halton which he had inherited. It was Lionel’s gardening passion which led him to choose the Exbury estate with its 2600 acres.

Lionel remodelled Exbury House with neo-Georgian designs by William Jenkins, and he created an idyllic family home bounded by the New Forest, The Solent and the Beaulieu river for his wife, Marie-Louise Beer (a great-great-niece of the composer Meyerbeer) and his young family, Rosemary, Edmund, Naomi, and Leopold.

It was at Exbury that Lionel realised his horticultural vision. It was said of him, that he was "a banker by hobby and a gardener by profession". The climate was gentle here and the soil was acid, ideal for the flowers which were to become his passion – the rhododendrons. Here Lionel grew orchids and developed hundreds of new hybrid rhododendons and azaleas for which the estate has become famous. The Gardens first opened to the public in the 1930s, the entrance fees raising funds for local charities. Lionel died suddenly in 1942. At the end of the War, it was left to his son, Edmund, to roll back the years of  inevitable dereliction in the gardens. In 1946, he set about the restoration of Exbury Gardens, opening Exbury Gardens to the public in 1955.

Exbury in the Second World War

Exbury House was called to play its part in the War effort. Renamed ‘HMS Mastodon’ (a stone frigate) under Royal Navy control, it became one of the key centres for the planning of the D-Day landings.

The Gardens continue to be looked after and developed with loving care by the current generation of Exbury Rothschilds, and Exbury remains today not only a significant name in horticultural history but a living and colourful tribute to a passion. 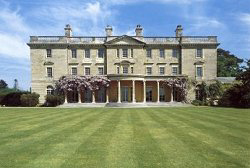