Louise de Rothschild was the only one of Nathan and Hannah Rothschild's children to be born at Stamford Hill. She married her cousin Mayer Carl, of the Frankfurt house, at Gunnersbury in 1842. Although the rest of her adult life was spent in Frankfurt, where she established and endowed many charitable foundations, she preserved a sense of Englishness in her home on the Bockenheimer Landstrasse.

Louise, like her sisters, received a good education, excelling in the arts and music. She was also a pious woman, who imbued the same qualities in her daughters, and Frankfurt became witness to their generous philanthropy. In 1876, the German Emperor conferred upon her the Louisa Medal in honour of her munificence.

She built the Clementine Hospital for girls in memory of her daughter and she endowed the Carl von Rothschild Free Library and Carolinum Institute which had been founded by another daughter.

Louise wrote considerably on religious themes. She died in Frankfurt on 12 December 1894. 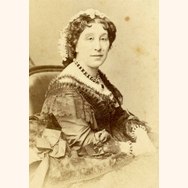