Nathaniel Mayer ('Natty'), 1st Lord Rothschild was the eldest son of Baron Lionel (1808-1879) and Charlotte (1819-1884) de Rothschild. He was born in London on 8 November 1840. As a child, he was a shy and reserved, possessing few of the social skills of his siblings. In his youth, he was a Captain in the Buckinghamshire Yeomanry. In 1859 he went up to Cambridge after an education with private tutors, but he left in 1862 and did not sit his final examinations. The time was not spent in vain, for he joined the circle of friends of the Prince of Wales, the future Edward VII. In 1876 Natty became Sir Nathaniel de Rothschild, inheriting the title from his uncle Anthony (1810-1876); since Anthony had no male heirs, the baronetcy passed on his death by special remainder to his nephew.

After their marriage, Natty and Emma lived at 6 Buckingham Palace Gate, where their children were born. Lionel and Natty first visited Tring Park, Hertfordshire in May 1872 and a week later bought it, Natty later making great alterations to the house and making Tring his country seat. From around 1879, Natty made his London home at 148 Piccadilly.

Nathaniel was a Partner at New Court, becoming Senior Partner of the London House on the death of his father in 1879. During his long tenure, the pre-eminent position of N M Rothschild & Sons in private venture finance was maintained and expanded. Under Natty, the bank made 70 loans to sovereign clients and governments. Following his father Lionel’s support to the British government to purchase shares in the Suez Canal in 1875, a close relationship was maintained with Benjamin Disraeli and affairs in Egypt; in 1881, Natty was one of the executors of Disraeli’s estate. Natty was instrumental in establishing the Exploration Company to exploit new mining opportunities in the New World. In 1887 Cecil Rhodes visited London and secured the backing of Nathaniel for De Beers in its bid for the French Diamond Company. Support for Rhodes had been encouraged by Randolph Churchill who had been acting as consultant to Rothschilds, assessing the prospects of gold and diamond mining in South Africa. Lord Rothschild later disagreed with Rhodes and his policies, although he later administered Rhodes' estate after Rhodes' death in 1902 and helped to set up the Rhodes Scholarship scheme at the University of Oxford.

Philanthropy and Leader of Anglo-Jewry

Both Lord and Lady Rothschild were concerned with welfare issues for their employees at Tring. He showed a particular interest in housing in the East End of London, through the 4% Industrial Dwellings Company, a model dwellings company whose aim was to provide decent housing, predominantly for the Jews of Spitalfields and Whitechapel. He also served as a trustee of the London Mosque Fund until his death. From 1889 until his death, he was Lord Lieutenant of Buckinghamshire and was well known as an agriculturist. In the 1902 Coronation Honours list, he was appointed a Privy Counsellor and was sworn a member of the council at Buckingham Palace on 11 August 1902. On the same day, he was appointed to the Royal Victorian Order as a Knight Grand Cross.

In 1906 he became Vice-President of the organising Committee for the Franco-British Exhibition, and he led a syndicate of financiers in advancing the substantial sum of £100,000 to the Franco-British Exhibition Incorporated. N M Rothschild acted as bankers for the Exhibition of 1908 which was a huge success. In 1915, as chairman of the council of the British Red Cross, he successfully led a campaign to raise a million pounds for their general needs and for wounded servicemen.

After the Russian pogroms of the early 1880s, Lord Rothschild took over as the leader of British Jewry. During 1905-1906, he presided over an international conference of philanthropists in London to collect funds and send a travelling commission to Russia to assess the scale of damage. The Commission travelled to St. Petersburg, where they met Russian bankers, and worked out the arrangements for the distribution of aid, which was paid from the Rothschild Bank in London. During his lifetime, Lord Rothschild held honorary positions in virtually every institution of Anglo-Jewry.

From 1865 to 1885, Natty sat in the House of Commons as Liberal Member of Parliament for Aylesbury. His father Lionel had previously been elected for the City of London from 1847 but had been unable to take the obligatory oath until 1858; they were MPs together from 1865 to 1868 and from 1869 to 1874. In 1886, Natty joined the breakaway Liberal Unionist Party, formed by Joseph Chamberlain, which ultimately merged into the Conservative Party.

In 1885, Natty became a member of the House of Lords when he was created Baron Rothschild, of Tring in the County of Hertford. When raised to the peerage by Gladstone, he became was the first Jewish member of the House of Lords not to have previously converted to Christianity. (Disraeli had been created Earl of Beaconsfield in 1876,  but was baptised into Anglicanism at age twelve).

In 1909, Lord Rothschild was famously derided by then Chancellor of the Exchequer, David Lloyd George, over his opposition to the People's Budget. Natty recommended the Lords reject the Parliament Bill, which was, however, passed. In 1914, after the outbreak of the First World War, Lord Rothschild was consulted for economic advice by Lloyd George.

The elder statesman of the City of London was seen as cautious and forbidding, but in the presence of children, especially his own grandchildren, his face lit up and he was at once playful and carefree. Natty died in London, five days after an operation on 31 March 1915. He was buried at Willesden Jewish Cemetery. Following his death, the peerage was inherited by his son, Lionel Walter Rothschild.

The 70th Birthday Testimonials presented to the 1st Lord Rothschild

The first Lord Rothschild took his responsibilities and duties as head of the family and as lay head of Anglo-Jewry seriously. Throughout his life, he and his wife Emma, Lady Rothschild (1844-1937) made donations and endowments (totalling many millions of pounds in today's money) to a staggering range of charities, organsisations, societies and groups encompassing health, education, social welfare, and leisure activities, both Jewish and non-Jewish alike.

On the occasion of Lord Rothschild's 70th birthday, on 8 November 1910, he received many testimonials and votes of thanks from the committees, trustees and boards of organisations that enjoyed his patronage and support, including:

Browse the Testimonials Gallery to view these miniature works of art. (Please note that reproduction of these images is forbidden without the express written permission of The Rothschild Archive London). 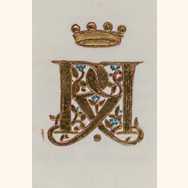