Emma Louisa von Rothschild was born on 23 March 1844 in Frankfurt.

She was married to her cousin Nathaniel Mayer on 17 April 1867. It was a true love match: Emma had been intended as the bride of James Edouard de Rothschild, whom her sister Laura Thérèse eventually married.

Emma and Natty moved to Tring Park, a home she adored and where she remained until her death on 7 January 1935.

She was very correct, considered prudish by some, and a woman with the 'courage of a lion'. She had a scientific turn of mind and was, like most members of her family, multi-lingual.

Emma was a practical solver of problems. She transformed Tring with the creation of a system of health care for the estate workers. 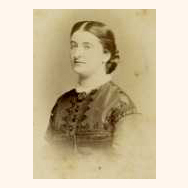